Humans seem to have always needed mythology. Yet all too often they come to accept it as fact – parable taken for reality. Mythology can entertain, inform, or mislead. Yet all too often, as with the bible and religious texts in general, it leads to erroneous beliefs and causes confusion. Such confusion can be exploited by an unscrupulous few to control the masses, as it has been throughout most of human history. Whenever allegory becomes superstition one can only hope that it breeds something wholesome. Unfortunately it rarely does. So within The Sylissin Chronicles I have proposed a new mythology through which to look at humans and their place in the universe.

I believe that any sound mythology should be able to withstand a reasonable degree of scrutiny. The gods atop mount Olympus, or the antics of the psychopathic god in the Old Testament of the Bible no longer fit with our understanding of the universe and how it works. For this reason I rejected the high-tech, Star Trek style of approach simply because the physical laws of this universe mean that this could never happen. Yet I still needed my characters to be able to travel at will through space and time in order to be able to present a range of important concepts and explore the place of humans in the universe. What I sought was something entertaining and plausible, involving humble, believable characters with whom people could readily empathise. For most of this I didn’t have to look very far, and it is here that a mere story begins to look more like mythology. Though much of this will only make complete sense after reading The Sylissin Chronicles, here seems like a useful place to lay some of this down.

They will take you

Facts about the fiction

Should the story ever be told? - Throughout The Sylissin Chronicles the question is raised as to whether or not humans should be fully informed about their place in the universe or, as a destructive species, whether it would be safer to leave them to their own devices to go extinct as they almost certainly will. My dilemma therefore must be whether or not I want people to see this as fiction - an elaborate parable – or something more; and it is here that the lines become blurred.

The seekers, the carivae, might take you deeper if you can but discover how to follow them. 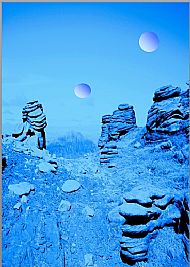 As a teenager I experienced a number of the dreams described in the first part of The Sylissin Chronicles, including those of the blue desert. As in the story, this was not simply a recurring dream but a succession of dreams leading on one from another until I developed a fairly clear picture of this region that I knew as Beukon near the city of Taulen Csiya on the world of Imira.  Within the story there is a place called Lo Elan Sola within the desert where the roof of a cave collapsed long ago leaving a broad amphitheatre surrounded by cliffs. I seem to know that place remarkably well considering it doesn’t exist.

Numerology – a useful trigger - It was as a teenager that I made an effort to write down some of my dreamtime experiences – my first stab at writing a novel. Chief among my memories was the name prelerah. This related to a species of humanoids on another planet but not the one with the blue desert. The reason why they interested me so was because there was a character by the Name of Nomaya Cal, a woman who I met in the blue desert who wasn’t from there but from another world. Her name is written clearly in that old story which I never did finish until I actually came to write The Sylissin Chronicles. Yet what is really interesting is that towards the end of the third part of that book a trick is used by the main characters – Adam Sylvan and Nomaya Cal Gueris – to make sure that their story is told. They plant the information within the minds of two humans, and then use numerology as a trigger. I will let Nomaya Cal herself explain as she is far more eloquent than I in this matter.

‘You see we wanted to plant a subtle clue that anyone with a strong curious streak and a little imagination might sooner or later uncover. For this we turned to numerology, a belief that numbers hold hidden meanings. There are several ways of working this, but one of the most common is to take a person’s date of birth, add the digits, add them again and obtain a number from this. Then each letter of the alphabet is assigned a number from one to nine. The person then calculates their ‘secret name’ by choosing letters that add up to the same number as their birth date. Confusing? Well let me show you.

‘So from this what Adam and I needed were two birth dates that would add up to something related to the prelerah. The first therefore was obvious. It had to add up in such a way that the word ‘prelerah’ would fit and little else. The second, being a female recipient, we chose my own name ‘Nomaya Cal’. Now if this sounds easy, believe me it wasn’t. Not only had we to do this, but then we had to artificially delay conception in two human females for a while. Later, at the end of their terms of pregnancy, the times of birth had to be controlled to ensure that they fell exactly on the required dates.

‘Sounds insane, even to me now that I look back on it; but we were caught up in the game and no extravagance seemed too great to ensure that the knowledge that Adam and I had gained was passed on to others. For though we had set down our experiences in the past, there was no guarantee that they would become widely known. Now that our project was complete, there was much to pass on, and a transfer of information via sylissii was the most efficient means possible. The little numerology game simply provided a combination to the lock.

‘The first, the human male, was born on the thirty-first of January in the year known to most humans as nineteen fifty-nine, in a small industrial town in north-west England where Adam and I had spent some time during one of our earlier adventures. The digits of his birth date when added together came first to twenty-nine and then, when the two and the nine were added, to eleven. If you look at the table above and add the numbers for the letters p, r, e, l, e, r, a, and h together you will see that they first come to forty-seven and then, when the four and the seven are added together, also eleven. Pretty cool eh?

‘The second subject, a human female, was born on the small Japanese island of Oshima where Adam and I had spent a little time during our latest adventure, on the third of August nineteen fifty-five. The digits of her birth date added together came first to thirty-one and then, when the three and the one were added, to four. The table above shows that the numbers for the letters n, o, m, a, y, a, c, a, and l together do exactly the same - something that, through my careful planning, I can be very pleased with myself about.’

The importance of this is that the first birth date is my own while the second is that of my late wife. So I was born prelerah while she was Nomaya Cal, and I only learned this as I worked on the ending of The Sylissin Chronicles, many years after first waking up with those names in my head. The reason that this is so remarkable is that I was simply playing around with numerology out of curiosity. It’s actually very difficult to come up with anything even remotely plausible as your ‘secret name’. It was actually only as I neared the end of my story and needed some plausible way that it might have been passed on when the main characters had no intention of sticking around that I thought of this again. So I tried prelerah first of all and it fit straight away. Then I just had to try Nomaya Cal and when that fit my wife and I just stared at each other in silence.

The carivae or ‘seekers’ – often referred to in The Sylissin Chronicles are remarkably well documented considering how they are supposed to be secretive, elusive and capable of invisibility. From references in mythology to recent sightings, this is fertile ground for both superstition and conspiracy theorists. Why I found all of this remarkable was that I had no idea about this until relatively recently. In fact the light that I based the carivae on was of a colour that I simply couldn’t name. Blue, Aquamarine, I couldn’t say - yet it lingered within my line of sight at the foot of my bed even though I now seemed to be awake and the dream to which it had belonged now ended. I stared at it in the darkened room for a period that seemed timeless before it simply faded away. [Search online and you will find plenty of examples.]

The sylissin dima or ‘fixers’ – were inspired by a white spider that I once found on the bathroom ceiling many years ago. I wondered if it was capable of changing its colouration, a bit like a chameleon, because it was fairly well camouflaged on the white artex ceiling. It was clutching a pale blue sphere to its belly, that I took to be an egg sack but which also reminded me of the spherical blue carivae.

How to cross the galaxy

With the speed of light a limiting factor in this universe, realistically there is no way that anyone could ever get very far out into space beyond this solar system and return within a period of time that would make the journey worthwhile. How this might be overcome came to me in a dream. This is perfectly true, but maybe not as remarkable as it sounds because I frequently go to bed with something on my mind only to wake up the following morning with an answer. I don’t know how unusual this is, and it could well explain why other parts of my story seem to have originating in dreams. However, though I have read widely on such subjects, I have never come across a solution like this one. It is fully explained in The Sylissin Chronicles and further explored in War of the Innocents.